I wont bore you with which or when, nor why I own(ed), any of these cameras, but I WILL easily sum up my personal perspective on all of them at once.
Nice build, outstanding lenses, brilliant noise control at high sensitivity, great colour, nice feel, small, handy, versatile, characterful. That's these Fuji cameras.
Why then, have I bought 2 more Canon EOS 70D's?
Unfortunately, there is one reason and only one reason for me. The best way I can explain it, is by an example: 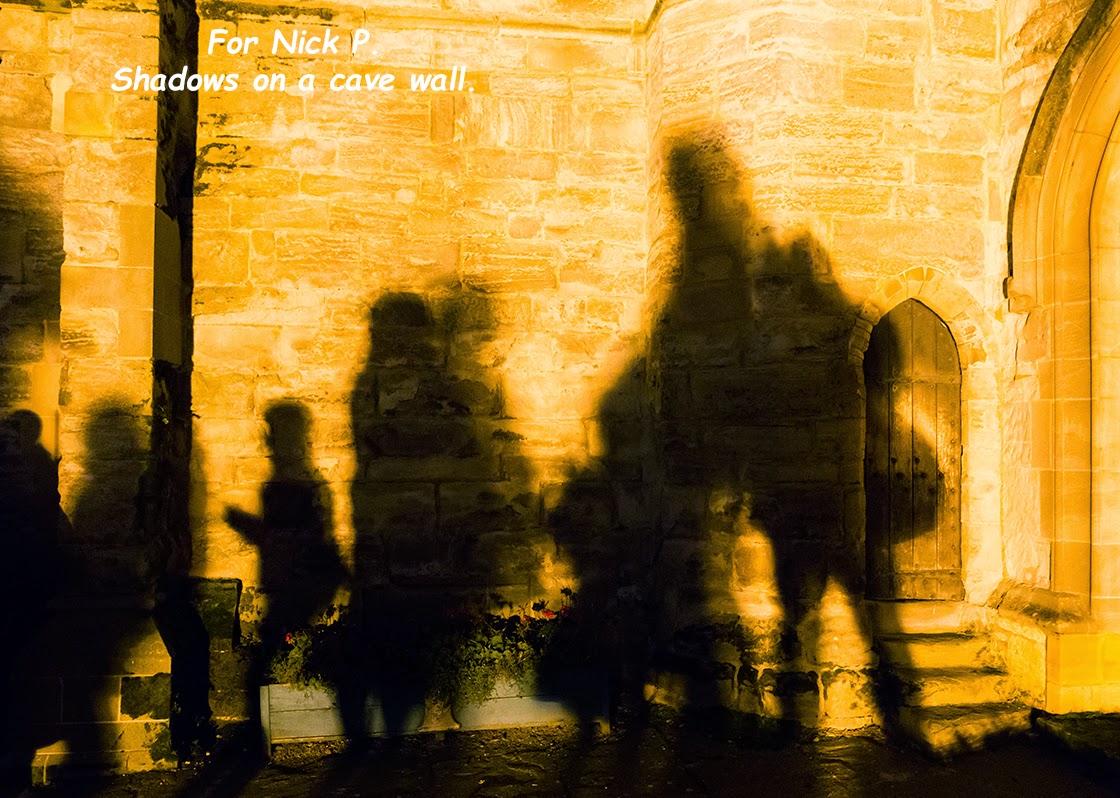 What has St Nicholas night in Alcester, got to do with Plato?
Nothing really, but whilst shooting St Nicholas Night, (more later), I saw this accidental projection on the church wall. It just reminded me of this, http://en.wikipedia.org/wiki/Allegory_of_the_Cave
I sent it to "Nick" who I knew would "get it" when he saw it.
Anyway, St Nicholas Night 2014
http://www.alcester.roundtable.co.uk/events/2558/alcester-round-table-st-nicks-night-6th-december/  Actually, I think this link is a year out of date..........
Here are a few pics: 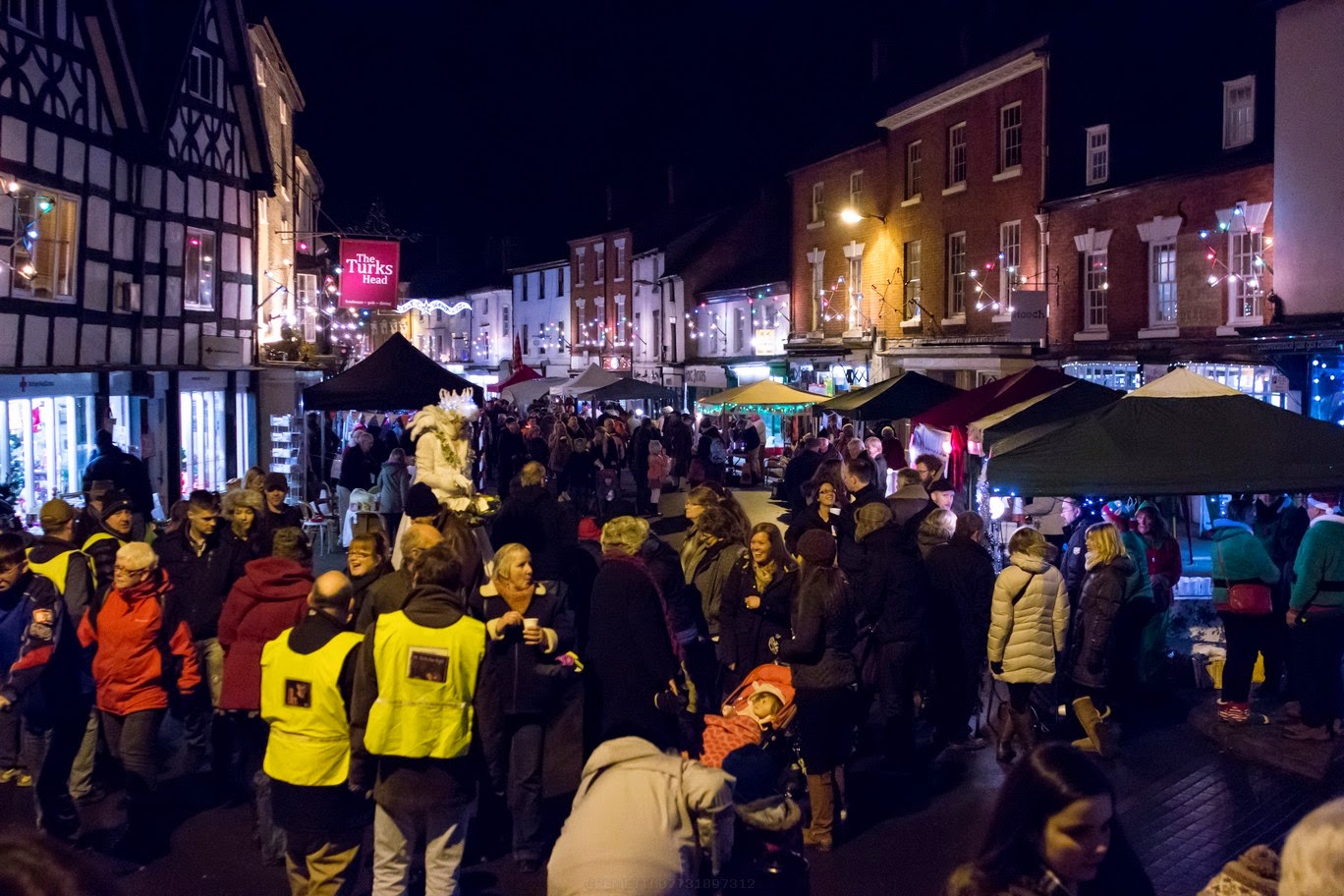 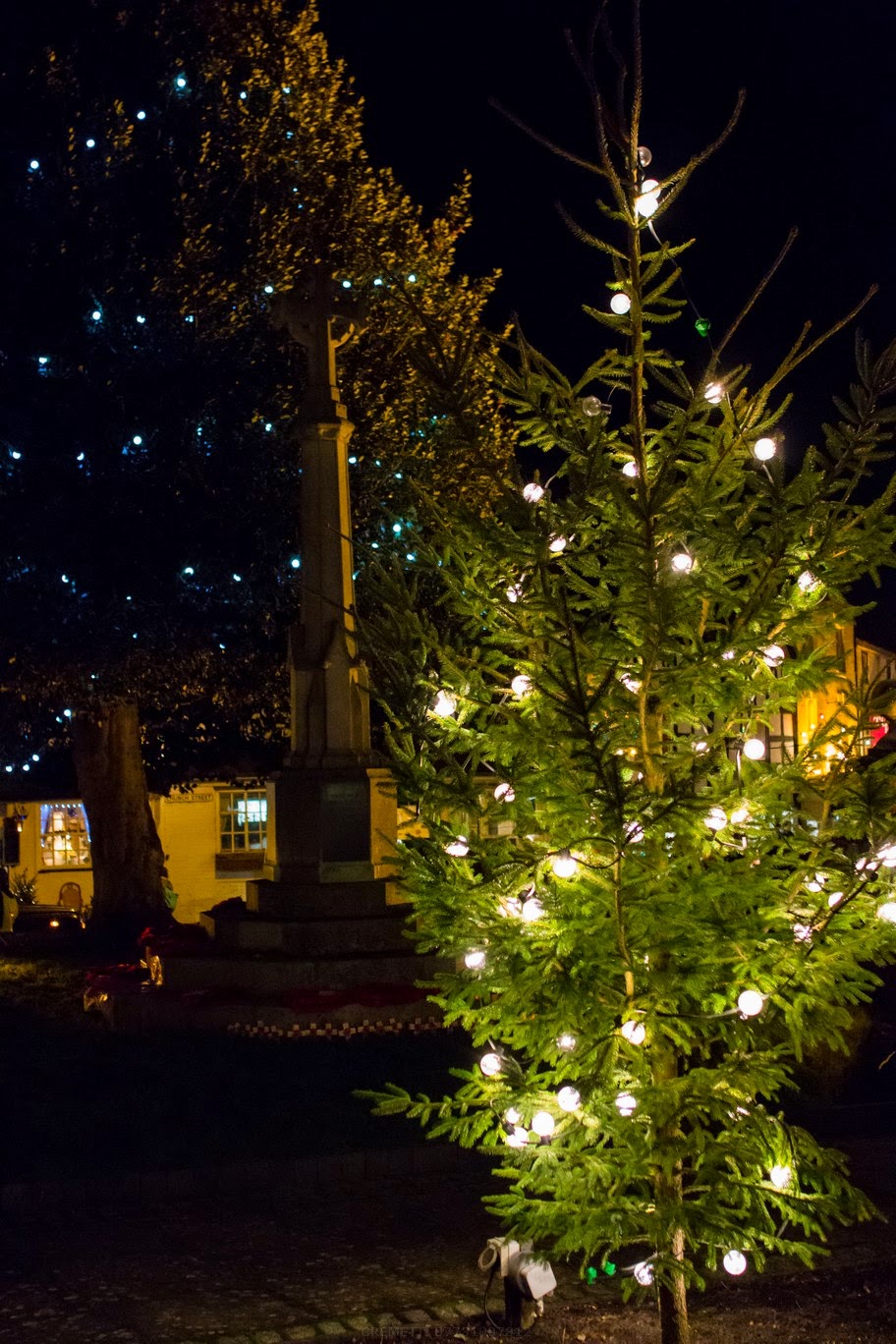 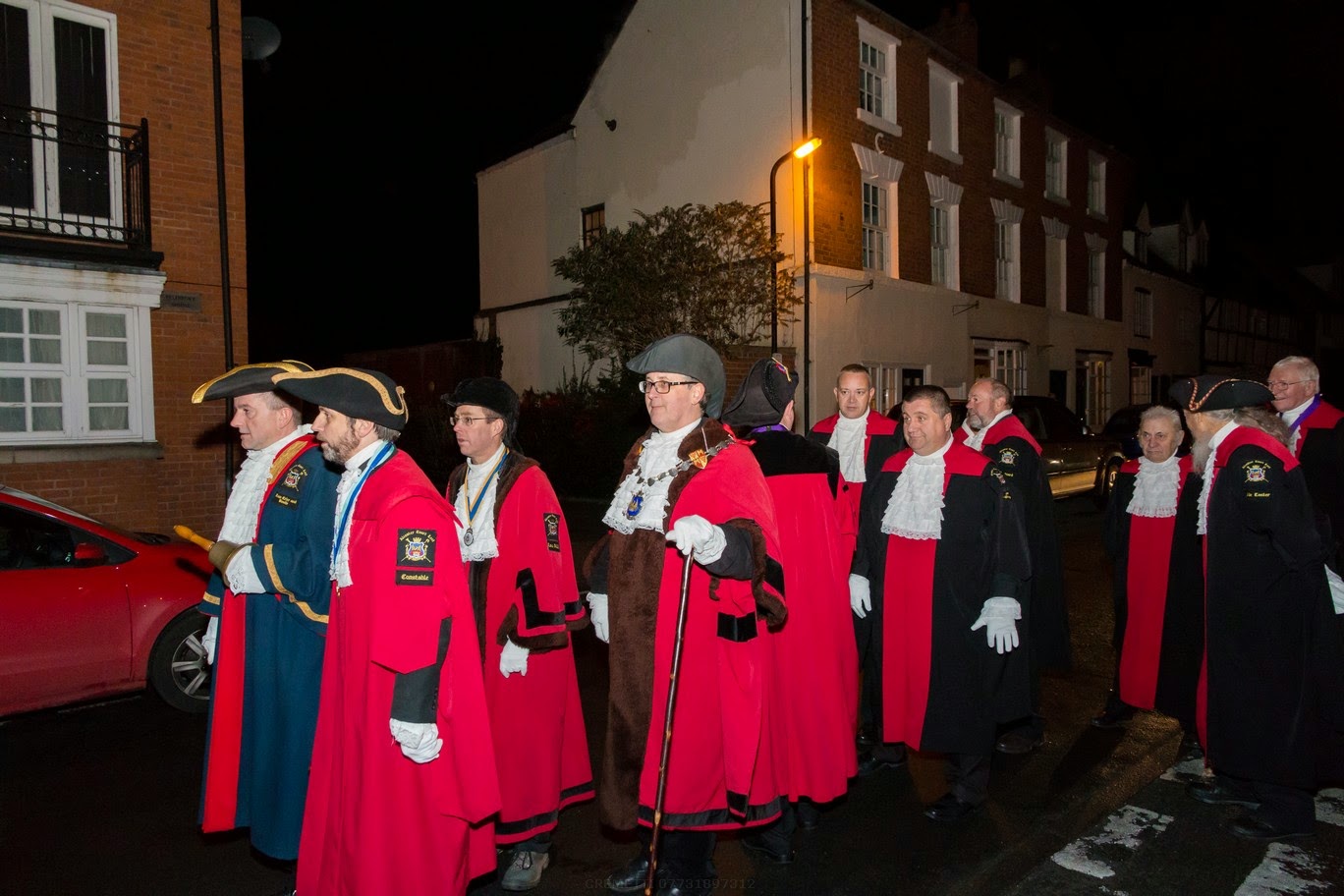 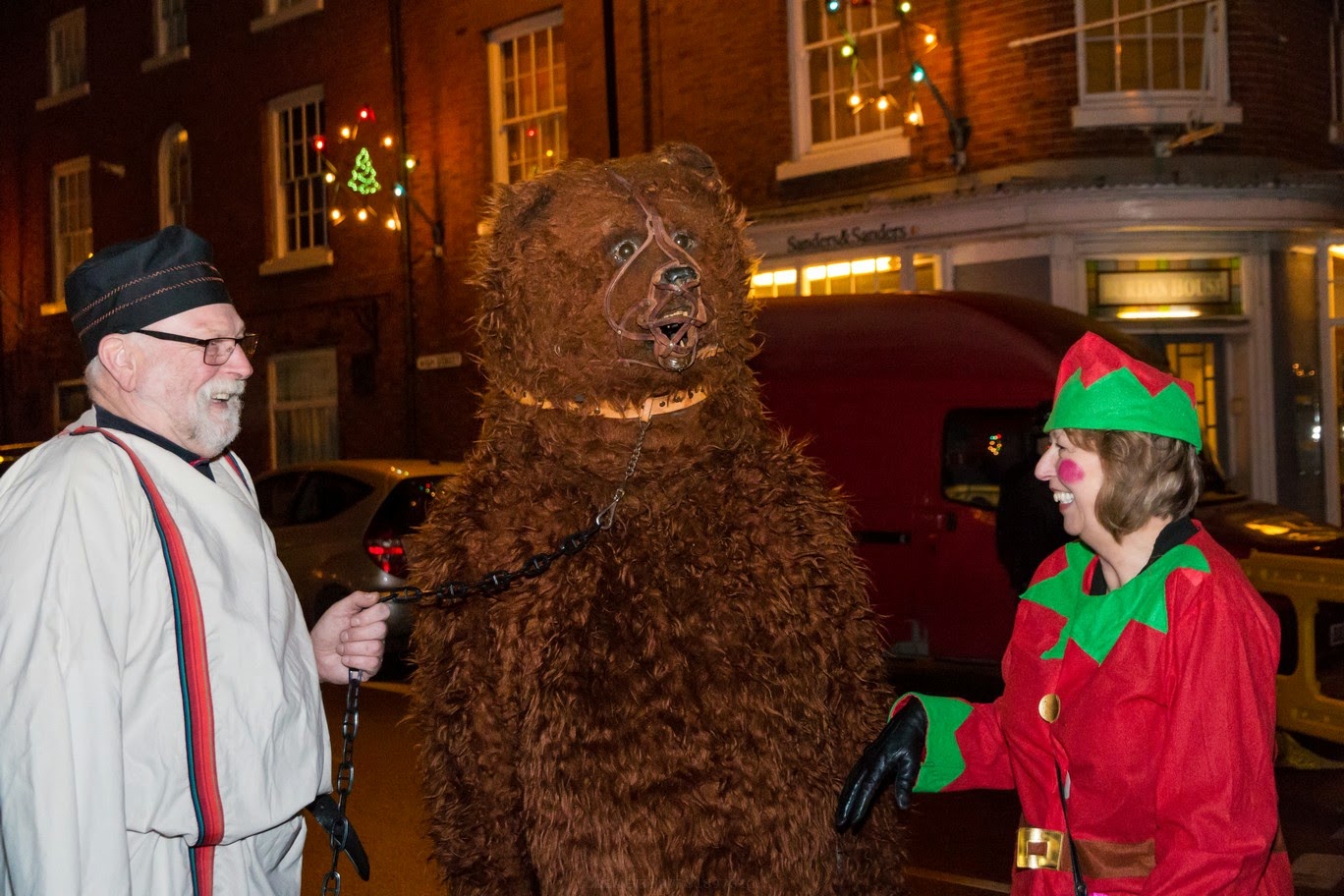 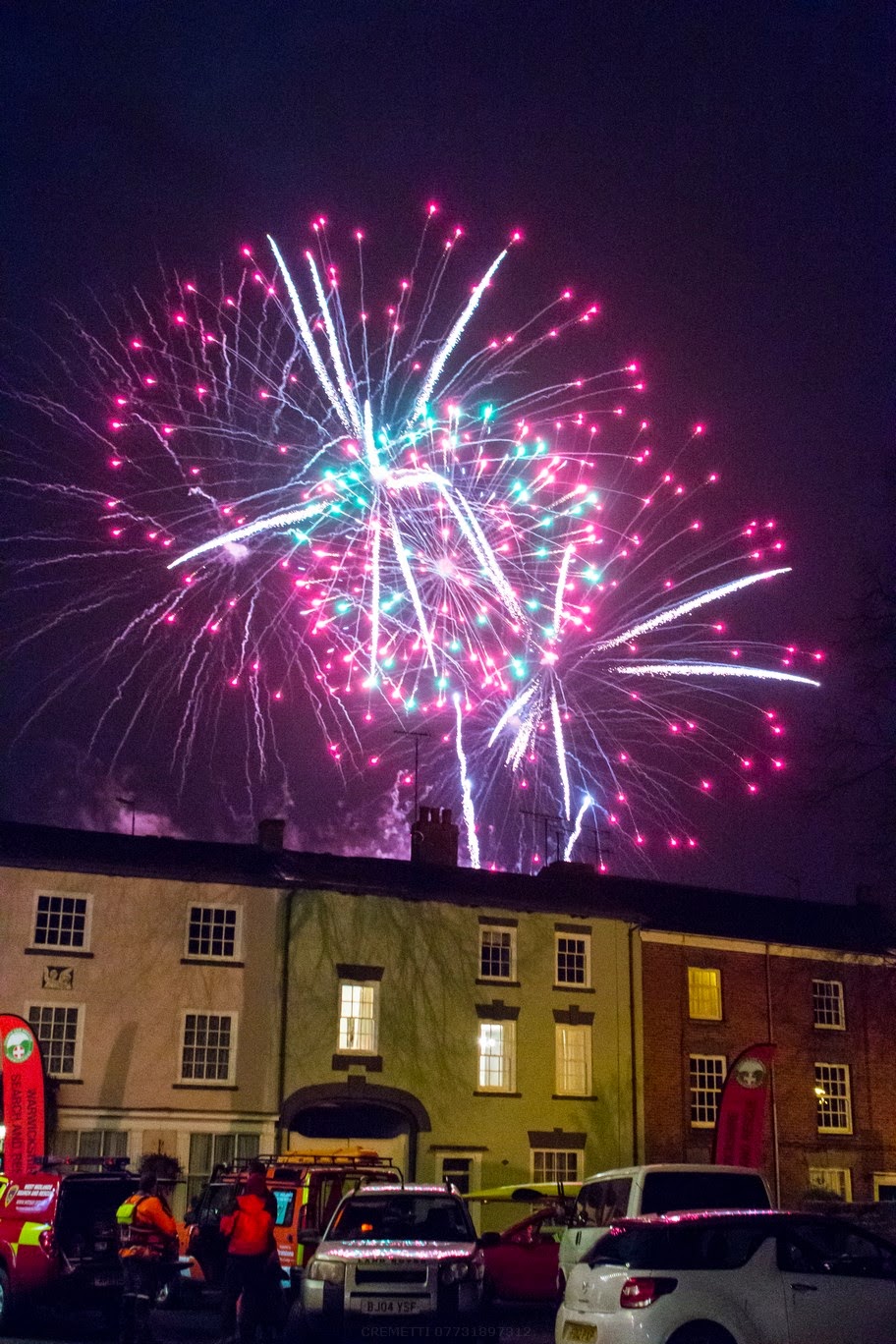 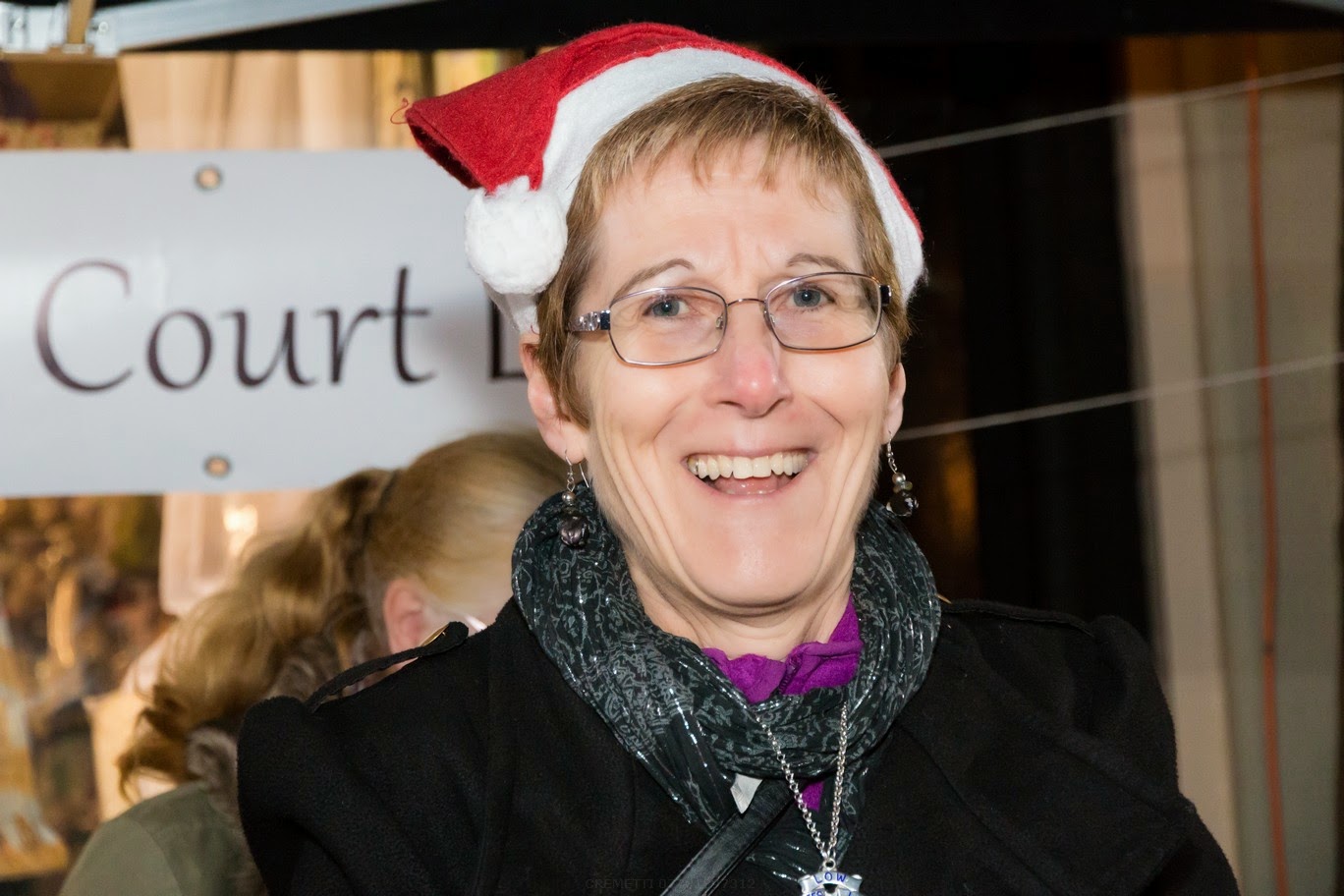 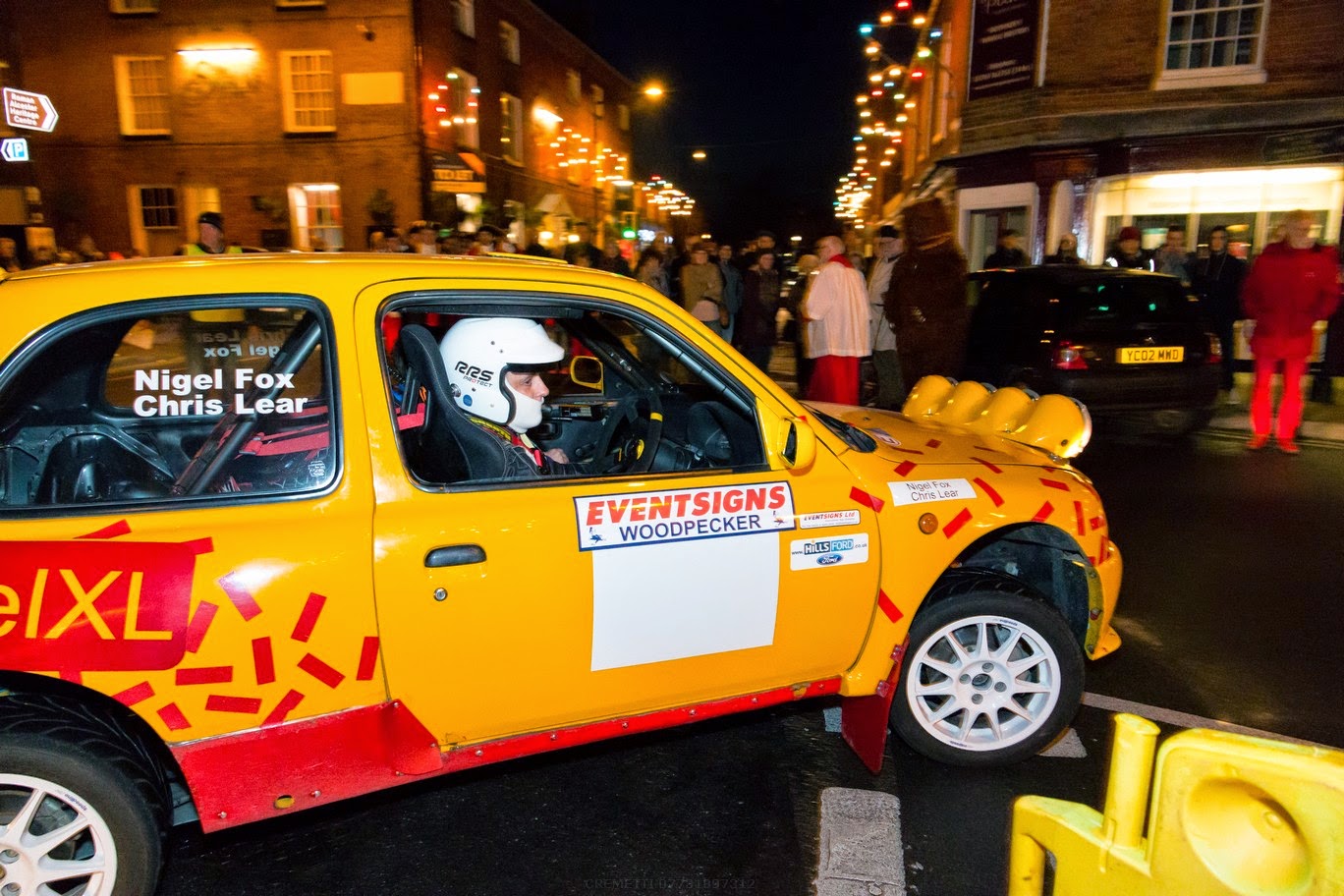 The 70D is a lighter, less durable body than the 7 series, lacks some weather sealing and has a slightly less complex focussing system than the 7.  It's classed as an "enthusiasts" camera, which means that if I'm working on a job I'm not enthusiastic about, I have to get a different camera. Fortunately, I'm always enthusiastic.
Anyway, first off, I actually bought a Fuji XT1. It's a fantastic camera, but you know how that story ends, (sadly). So, I bought one 70D and tried it out. I have to say that it's turning out to be my favourite Canon yet. The results are more "rounded", the handling easier, (for me, anyway). I cant really explain it without going all techno-boring, so I'll just leave the fact that I just like it, to be my reason for liking it. (Logical huh?).
Shortly after this, I bought another 70D, and the two sit playing cards together when there's no work on.
Ah, yes......... I do still own a Fuji XE2, which is great. Hesitant, but great.

The end of the line for the DSLR?

Well no, actually I just like the header.
I must say though, that as I get older, (I'm over 21 now), my two Canon 7Ds, two zoom lenses, 2 flashguns, and assorted batteries, cards, notebooks and dog biscuits are getting heavier. Why this is, I don't know. I think they sneak off to Mac Canon's for fries when I'm not looking. I looked at them today and couldn't help thinking how they were like me, old, fat, and overcomplicated.
So, there was some disturbance in the ether when Shaun from Doverow Studios turned up with a model of a 1970s camera.......  Didn't he? "Seriously, Shaun, what's that?" Ok, it looks fantastic, but it's £1300 with the lens? Hmmmm..... expensive for a mere model, cheap for a workman's pro camera.  Is this a joke?
In the hand, it doesn't feel like a joke. It's metal, substantial and precise. It has dials and buttons everywhere, like a real camera! It has an aperture ring too!
Shaun had with him, the camera body, "standard" prime lens, a semi wide and a wide. He also had a 70-200, (roughly), zoom.  After much fussing and poking at the camera, we went out to test the new beastie against my EOS 7D and a 15-85 which have paid for themselves many times over; surely this upstart would be shamed?
Shaun and I travelled a mile or two and visited Alcester, Weethley and Kinwarton, shooting all the time and wondering how the images would compare back at base. I used the upstart camera a few times and deliberately pushed it to shoot ISO 6400, f2.8 at 1/20th, handheld in a little unlit church as I was told that noise was low, and stabilisation very good:  but was it true?
REVELATION
I have to admit this, though it pains me..... This upstart was far better than my Canon; back at base, the upstart images shone. They exhibited better noise control, better dynamics, better sharpness - better everything really. Originally, I paid about £1900 for the Canon and this one lens, and this lens is slower than Shaun's, plus, stabilisation is not as effective. Overall, the Canon is 3 times the size of the upstart and at least twice the weight for about 2/3 the performance. What’s going on?
All I can say against the upstart is this: It may not be fast enough in it's focusing for high speed sports and sudden action, (maybe some wildlife). Other than that, I'm yet to figure out what to complain about:  and I have tried! Oh, what is it? It's a Fujifilm XT1.
ADDED FOR CLARIFICATION....... I WANT ONE!!!

See some pictures from the Fujifilm XT1 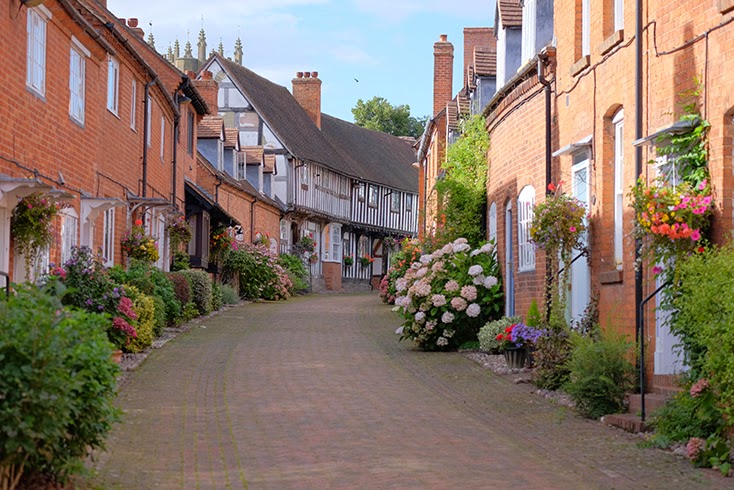 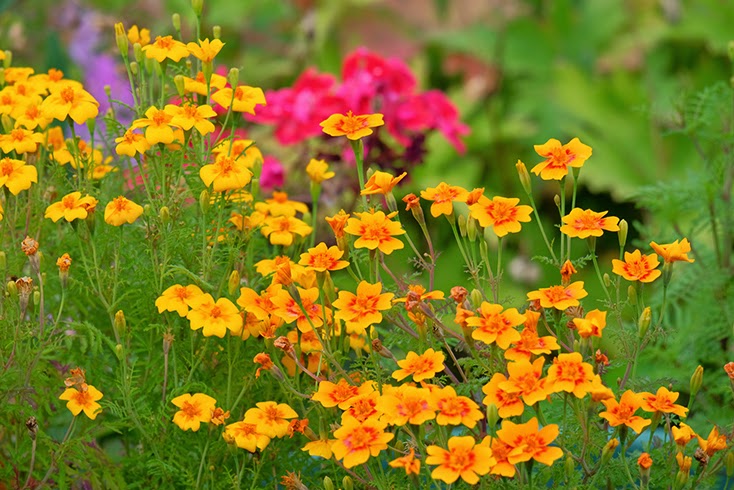 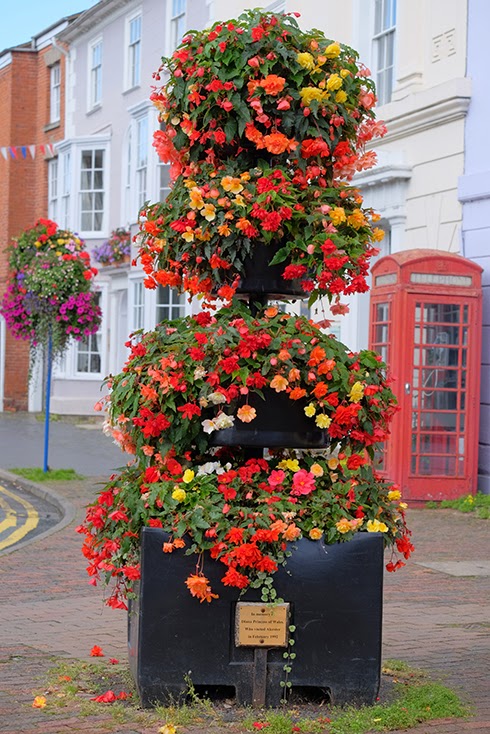 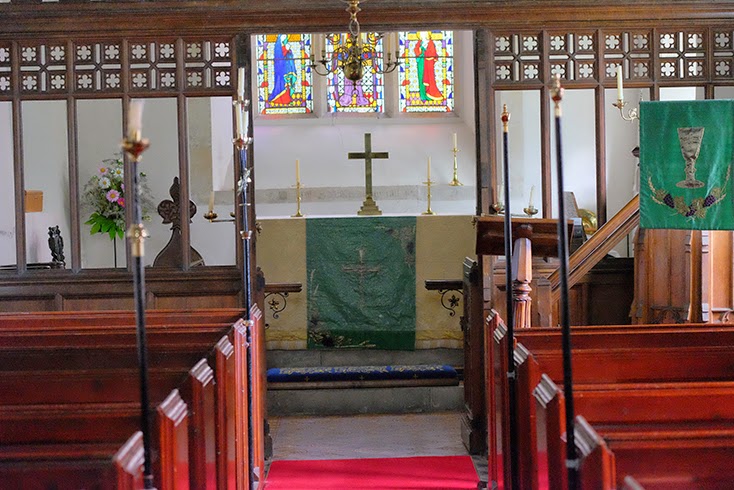 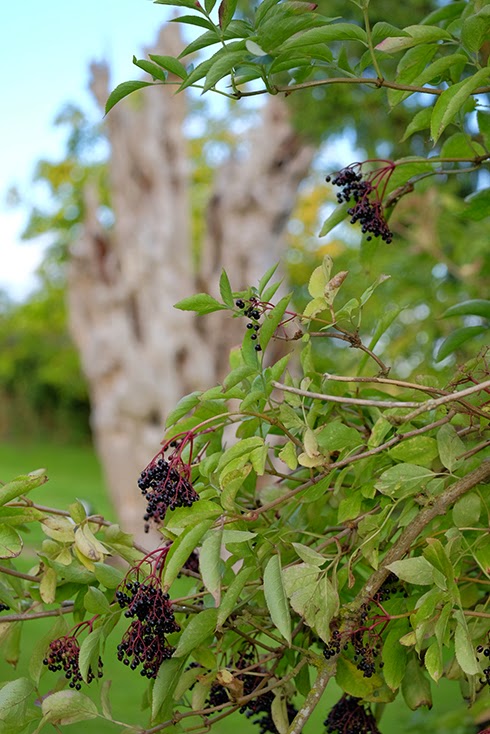 Self employment. The never ending cry.

I don't like to complain.
Sometimes my not complaining makes me too wound up though, and I do do something. The safest way to "let off steam" is to write here...........

As any working photographer knows, it takes years to be even acceptable in photography. Now you may think that this is a stupid thing to say, after all, modern cameras are "auto everything" and can take all the skill and hard work out of the craft, yes?
Well, let's consider this:

1/ You're in a dimly lit venue. Flash is prohibited and time is limited.  Your subject will appear, (maybe on stage, for example), for 20 seconds to receive an award, (or some such thing). Do you KNOW that you can do it?

2/ The light is harsh, yet a balanced exposure revealing texture is required. Time is limited. Do you KNOW that you can do it?

3/ An average sunny street event turns into a torrential downpour. The stalwarts manning the event continue.  Do you? Can you?

4/ The product image has a very specific colour. The client needs the photo to be correct. Do you KNOW that you can do it?

5/ The product needs retouching invisibly. Do you KNOW that you can do it?

6/ The client is a well respected and moderately famous person. Do you know how to treat him/her?

7/ Your camera jams.  Do you have a back up, or do you just let your client down?

8/ You're involved in a minor accident at a venue. Are you insured for Public Liability?

9/ Your computer back at base breaks down. Can you find a back up computer RIGHT NOW?

10/ Your files on your cameras card are corrupted. Whilst there may be no hope here, do you have the means to attempt repairs?

11/ Do you have enough money to replace gear and still eat/pay bills?

How is this a rant?  Simple!  Here we have expensive, stressful, time-consuming, artistic, technical and social issues. Whilst no one is perfect, a photographer will, (I hope), at least TRY to cover most of these bases.

So why do I keep getting asked for freebies?

This very day, a major tourism agency asked for images, but added, "we have no budget for this kind of work, please send us something small............."
SMALL?  SMALL?

Another favourite is "we will credit you on the image but won't pay"  Great, if you are National Geographic, the Times, Time magazine or the BBC, then yes. Otherwise, erm..... no.

I'd LOVE to work for free, really. I'd love to give images away and just enjoy meeting people and challenging myself, but there's NO FREE LUNCH.
Posted by Cremetti at 12:06 Links to this post

I thought you might be interested in some pictures from the 20th anniversary of the "Knights Bretvins."

Now despite the fact that my mother was an expert in French and Latin, I am not much of a linguist, even my Italian is 99.9% rubbish. It's for that reason that my article here is a bit vague.......

The Bretvins are as I understand it, the guardians and promoters of  the wines of a  a specific area of France, and the customs, culture and  traditions of that region.  (See below)

Here is an extract, (by kind permission of Alcester Bretvins), from one of their websites.....

"The Confrerie d’Alcester was founded in 1994 as a direct outcome of the signing of a treaty of friendship – Protocole d’Amitie – between the parent body of the Order of Chevaliers Bretvins in France and the Alcester Court Leet, two organisations with very similar cultural aims.  The Order in France, centred on the Muscadet wine producing region of the Pays de Nantes, where Alcester’s twin town of Vallet is known as the Capital of Muscadet, has the principal objectives of promoting the products and traditions of its Haut Breton region, including its wines and gastronomy, together with the maintenance of its festivals and customs.  Similarly, the Alcester Court Leet, an organisation dating back some 700 years, continues to uphold the ancient customs, traditions, and ceremonials of the town and Manor of Alcester.

The Protocole was signed at an important ceremony on 23rd October 1994 in Alcester’s medieval Town Hall, attended by town dignitaries, Court Leet members, and a contingent of Bretvins from France.  Following the signing, the Grand Master of the Order, Michel Bolo, requested that a special branch of the Order be formed in Alcester.  This was immediately taken up by seven individuals, being members or associates of the Alcester Court Leet, certain amongst whom were signatories to the Protocole.  These seven became the first Chancellerie of the Confrerie.

Now grown significantly in numbers from the original seven, the Alcester Confrerie is proud to always include the superb Muscadet wine at the forefront of its numerous ceremonials and activities. "

As I understand more, I shall write more. Meanwhile, with particular thanks to Mr J. Howell, here are the images. 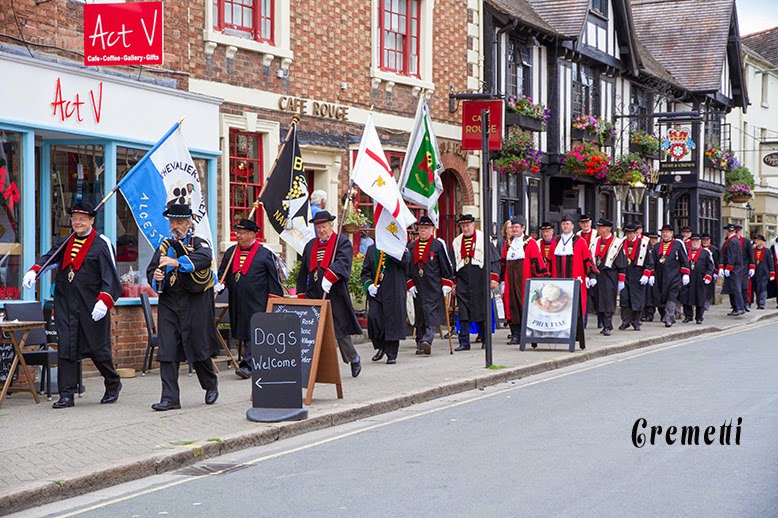 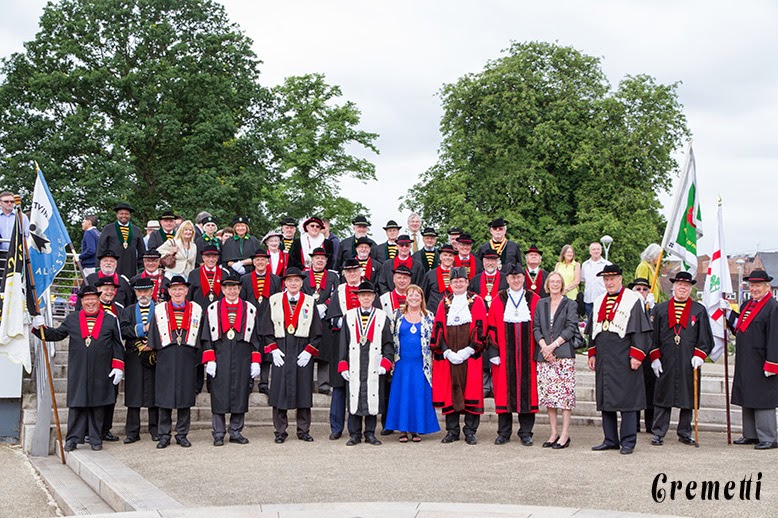 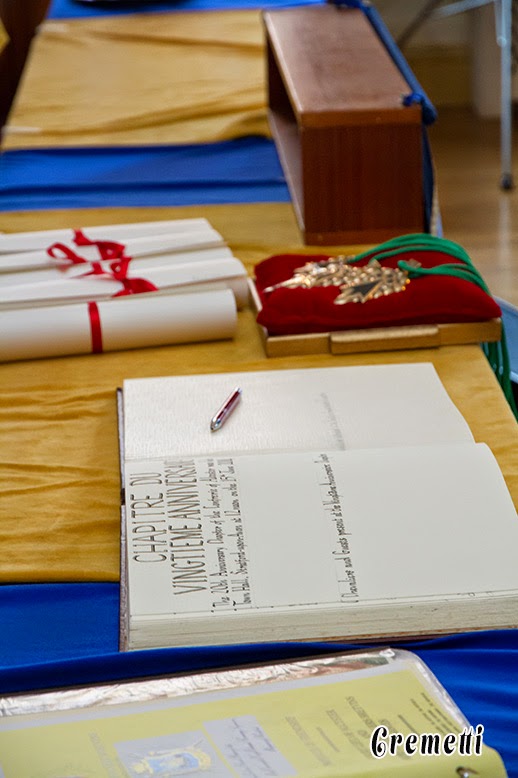 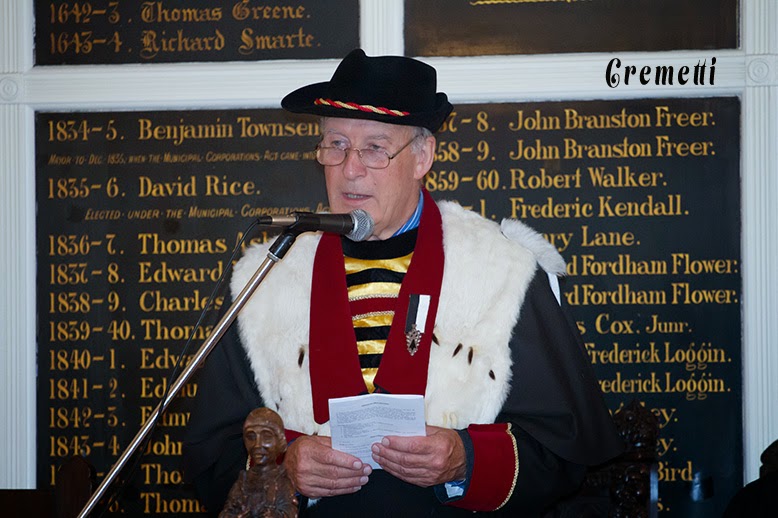